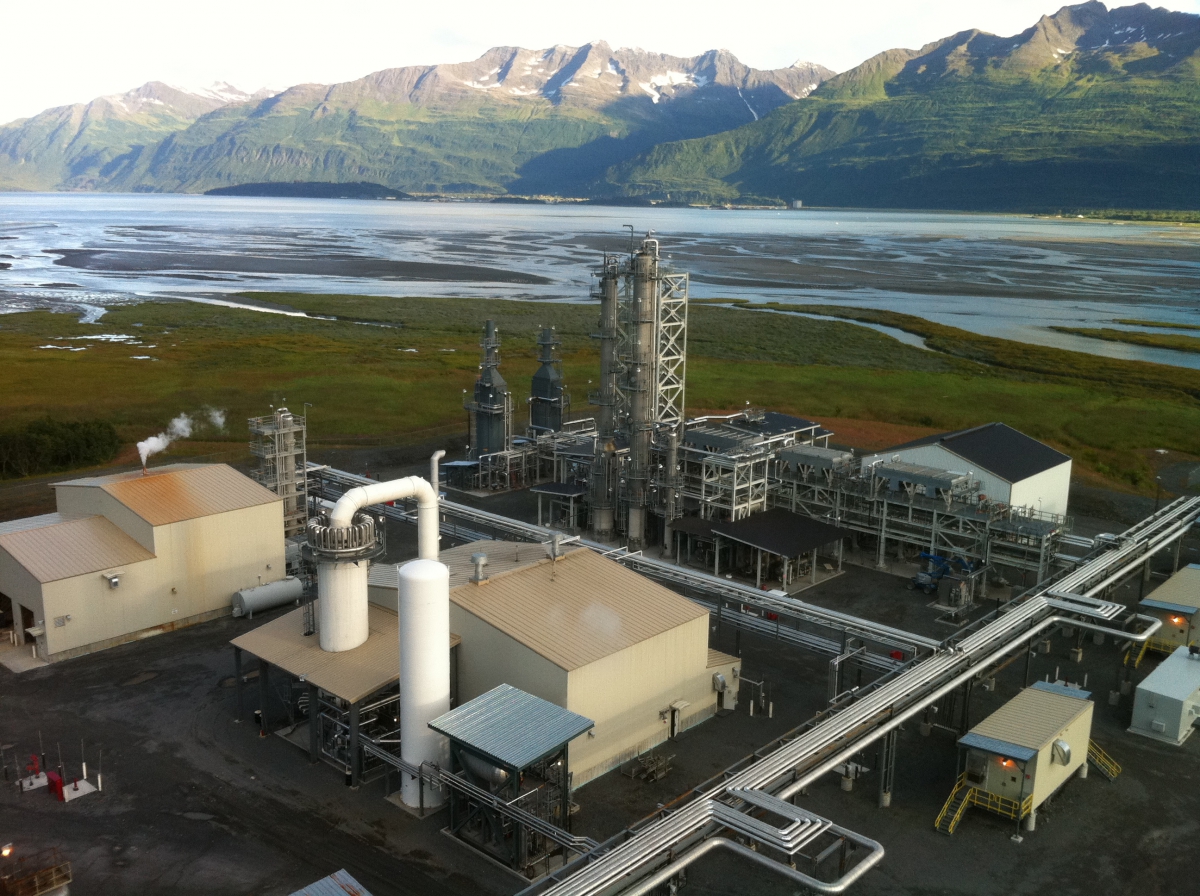 Alaska Anvil continued to grow after being awarded and completing projects for two new clients: the Valdez Power House Upgrade for the Trans Alaska Pipeline and the Crude Unit Upgrade for Petro Star’s Valdez refinery. 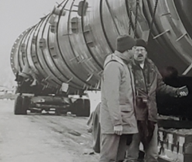 Awarded the ARCO Alaska Prudhoe Bay fuel tankage, fuel depot, and crude topping plant upgrade project. This project established Alaska Anvil’s presence and continued work in Alaska. It was the beginning of a long and successful relationship with ARCO Alaska. 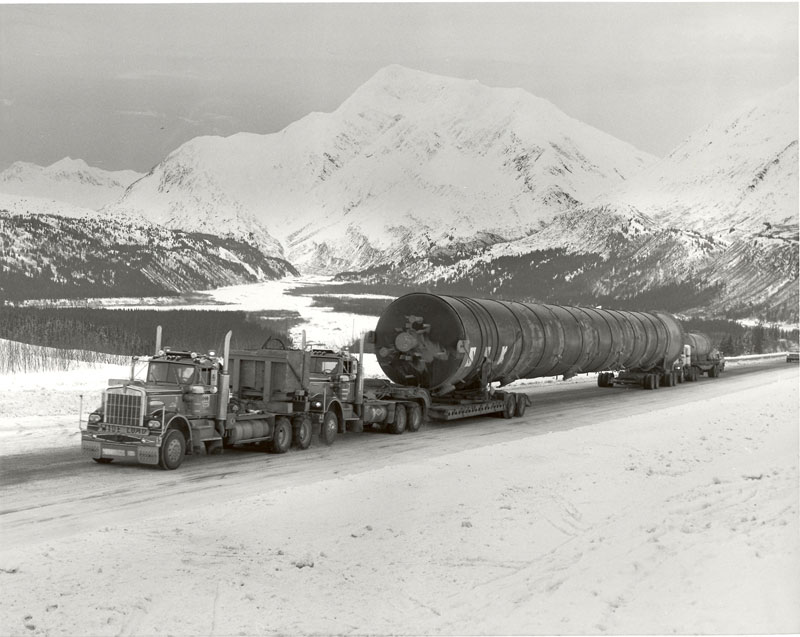 Anvil is awarded our first large project in Alaska for MAPCO Petroleum. This project includes a grassroots crude unit and gasoline unit. This was Anvil’s first large project outside of the Bellingham area. It was executed in Bellingham and accelerated our growth and allowed us to hire some key employees – many who are either still with Anvil or retired from Anvil after long and successful careers. 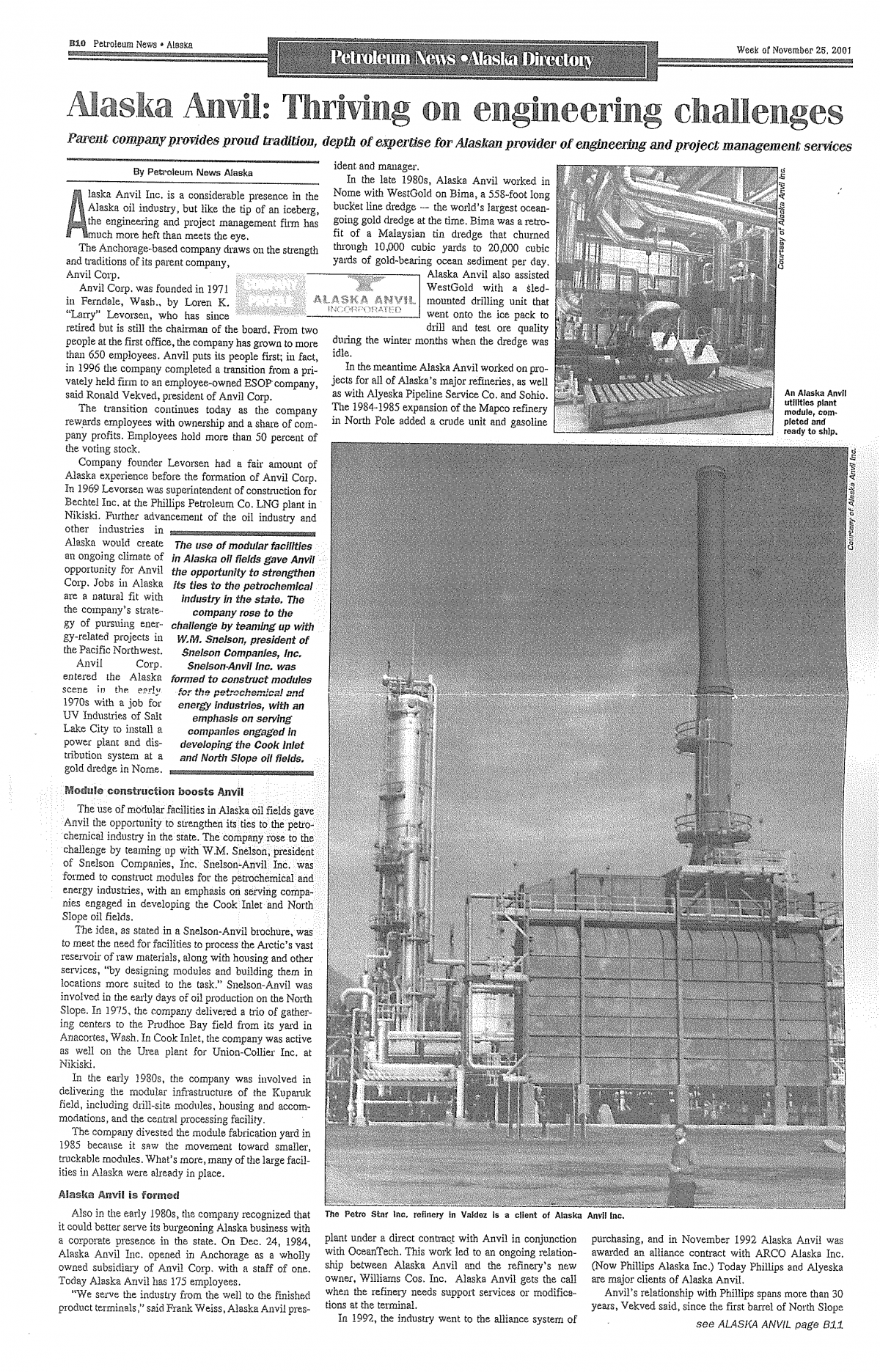 Alaska Anvil Incorporated is formed with a one-man office in Anchorage, AK. Alaska Anvil was a wholly owned subsidiary of Anvil created to better serve the needs of Anvil’s Alaskan clientele. From 1985 – 1987 the Alaskan Oil Industry suffered hard times and the office stayed small. In 1988, the market saw improvements and Alaska Anvil began to grow. 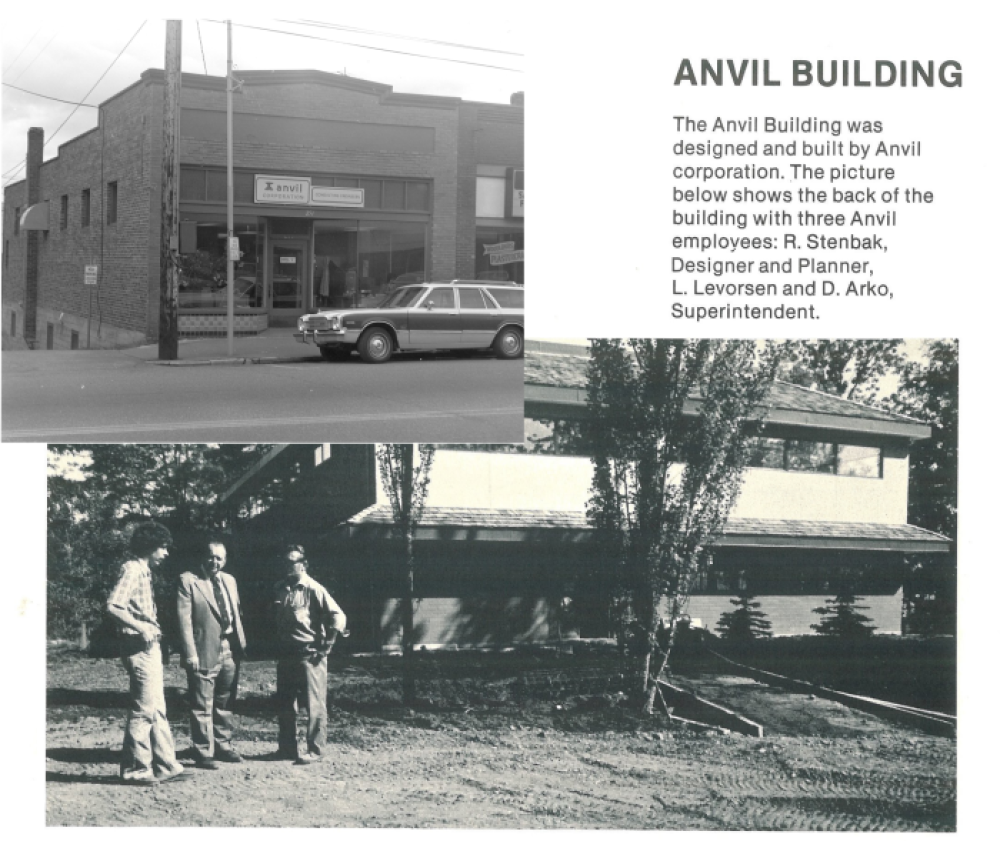 Anvil built its main corporate office building (Building “A”) and moved from Ferndale, WA to its current headquarters in Bellingham, WA. At that time, about 40 people from all disciplines worked in the main building. Anvil has designed and built all of its Bellingham campus facilities, which now has 11 buildings. 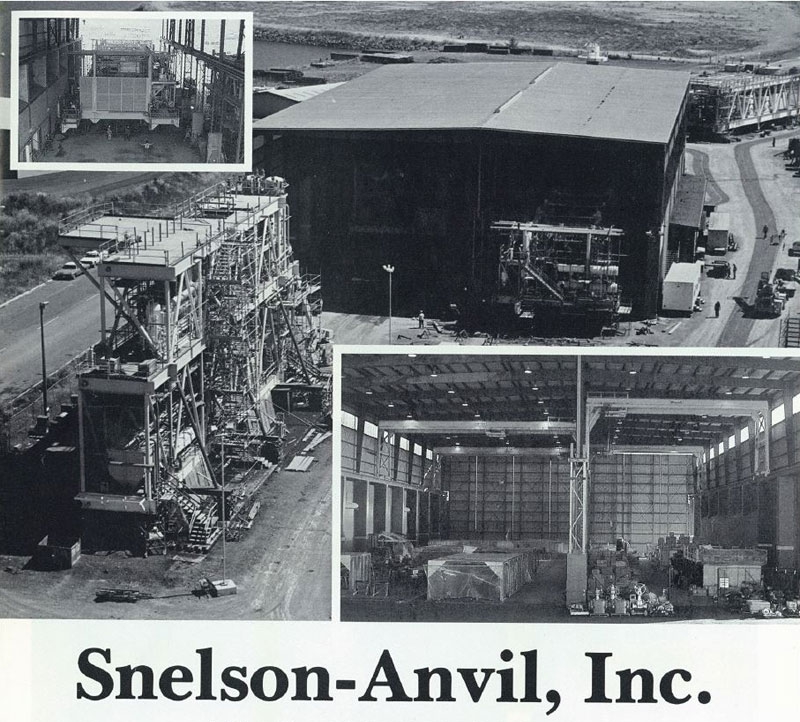 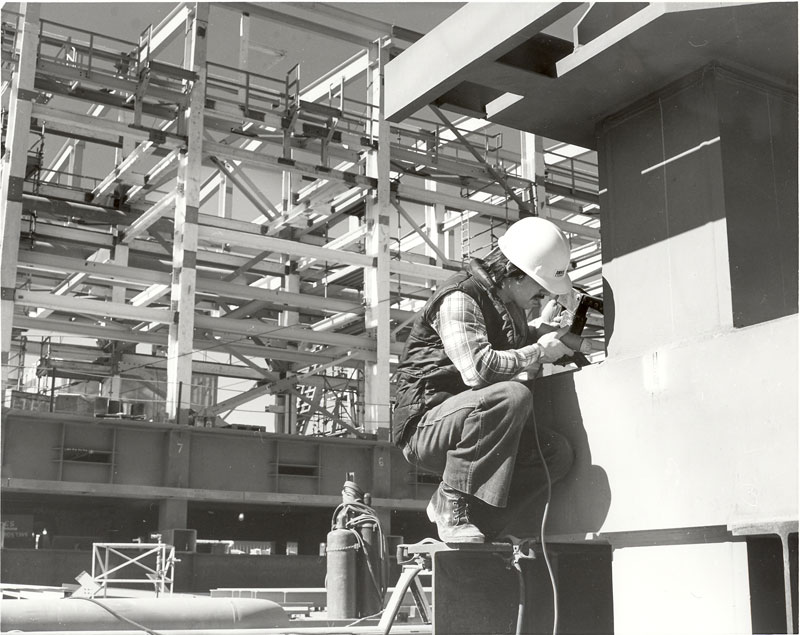 Anvil’s Nondestructive Examination Department (NDE) is established. The NDE Department specialized in measuring vessel and piping thickness and x-ray and corrosion monitoring for local plants and fabricators. Anvil also provided NDE inspection on many of the modules that were fabricated in Anacortes and sent to the North Slope of Alaska. The NDE Department was based in Burlington, Washington. 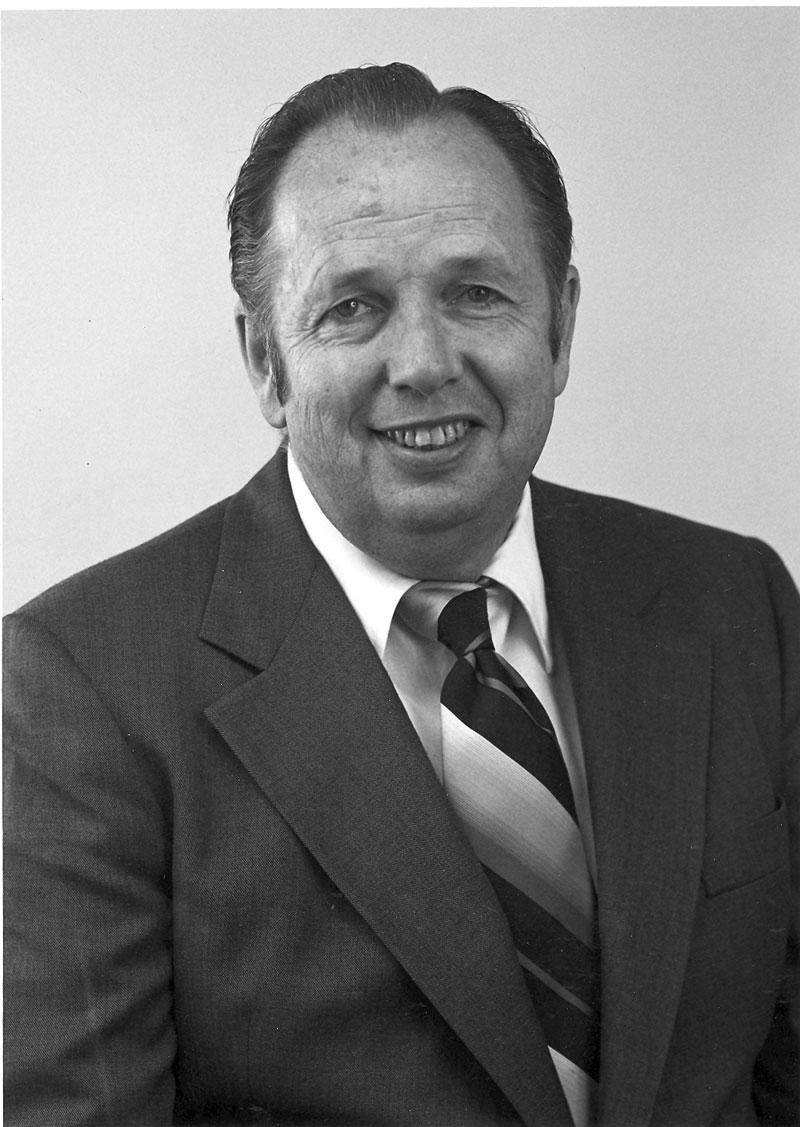 Anvil Corporation is founded by Larry K. Levorsen in Ferndale, WA. Larry founded Anvil after 20 years of engineering and construction experience with refining and petrochemical projects in the United States, South America, and Canada. Larry selected northwest Washington State for Anvil’s headquarters because its location had easy access to several area refineries.

The ARCO Cherry Point Refinery was one of Anvil’s first major clients. Anvil’s focus was refinery work, but we also served local commercial and industrial clients. Anvil continued to broaden its work base and was eventually working in all 4 local refineries: ARCO, Mobil, Texaco, and Shell.

Anvil Corp is proud to be an Equal Employment Opportunity (EEO) Employer. We are committed to cultivating a workplace in which diverse perspectives and experiences are welcomed and respected. We do not discriminate on the basis of race, color, religion, creed, ancestry, national origin, sex, age, disability (physical or mental), marital or veteran status, genetic information, sexual orientation, gender identity, political ideology, or membership in any other legally protected class. We encourage individuals with diverse backgrounds to apply. Read the EEO is the Law poster here.
©2023 Anvil Corporation | Wordpress Website Design by Peter James Web Design Studio